The Great American Health Bar and subway to La Guardia

I ate at The Great American Health Bar in New York a few days ago, off of 57th St. and 5th Ave. I wasn’t looking for it—just waiting for the express train to La Guardia and needed something close to the 57th St. station.

Funny little restaurant. I recommend the experience. (I may or may not be back, myself.) It’s a unique fusion of Americana and Indian vegan. The decor is all American diner, but it’s staffed (and owned, presumably) by Indians, and the food is largely vegan (though they serve yogurt smoothies and tuna melts, too).

I had a smoothy from the juice bar and . . . yes, a tuna melt with muenster on whole-wheat. (I had intended to order one of their Indian dishes—Indian cuisine is my favorite ever—but the melt caught my eye and I wanted to see if they did anything particularly groundbreaking with it.) It was delicious. Overpriced, but it’s a half-block from the Plaza, so it is what it is. 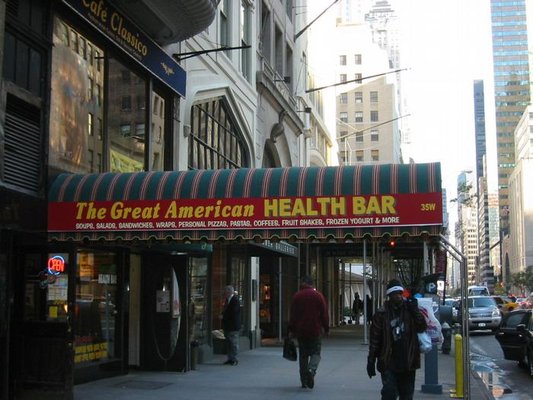 Mostly I was intrigued by the mainstream feel of it all. They’re working hard not to come off as an elite, vegan, health-nut joint. Rather, just another dining alliterative for regular people who want to put-down something healthful for a change. A success, as far as I’m concerned. 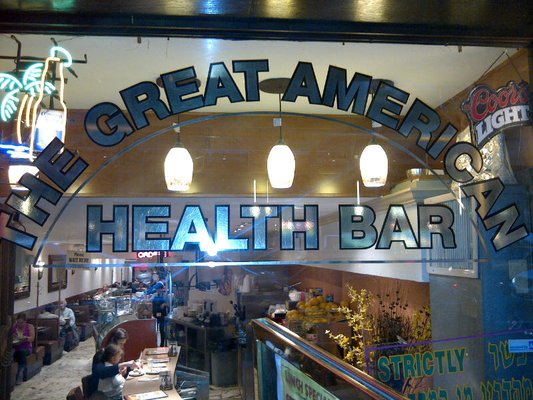 I also discovered that it’s best not to wait for an R Express from 57th to Jackson Hts. (as close as the subway gets to La Guardia). Instead, take an R Local (which comes much, much more frequently) out to Queens Plaza, then transfer to an E train (which are all expresses, which come frequently, and whose schedule seems to be timed to coincide with the arrival of the R Local).

But that’s wasted knowledge. Next time I’ll just take Gett or Uber to La Guardia. The blasted #70 bus from the subway to La Guardia almost never comes (well, it comes every 5 minutes but only accepts passengers every ~20 minutes which only makes things worse). I had to use Uber to get from the stop to La Guardia which cost me $25. Gett offers a flat rate of $52 from midtown to La Guardia.